While people are used to seeing dogs with talents such as catching Frisbees and jumping through hoops, a dog that can paint is a rare breed, indeed. Meet Arbor, a former animal shelter resident, now a Las Vegas-based artist with a style all her own. Arbor’s owners, Bryce and Jennifer Henderson, help Arbor auction her artwork to raise money for animal welfare advocacy groups.The Hendersons, who have always loved pets and have adopted shelter pets in the past, met Arbor when they visited a Las Vegas animal shelter in 2011. Something clicked in their spirits, and they were moved to add Arbor to their family. After the adoption, Jennifer and Bryce realized Arbor was a quick learner and enjoyed pursuing new adventures, so they decided to teach her to paint. Training started with a marker for the budding artist to hold in her mouth, and then they gave her a treat when she made a mark on the paper. As Arbor’s artistic skills increased, the Hendersons transitioned her to paintbrushes. 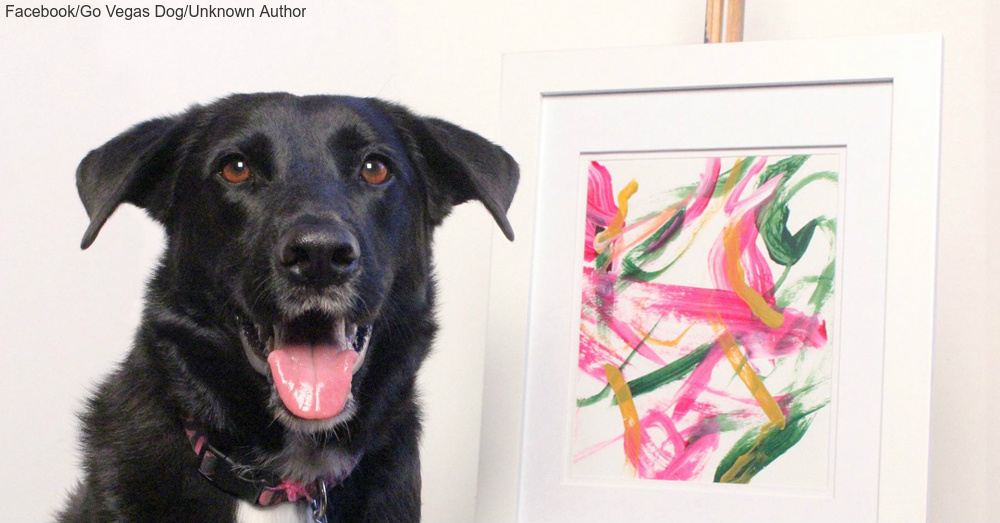 Arbor has fun painting, and she produces lively, colorful works that Bryce describes as abstract. Like with most abstract art, people interpret what they see in different ways. One thing that everyone can agree on is the artwork is having a positive impact on humans and shelter animals alike. The Hendersons sell Arbor’s pieces at auctions over the internet, and have raised from $240 to $1,000 per piece. They distribute 100 percent of the proceeds to help animal rescue and welfare organizations.Arbor and the Hendersons volunteer at the Las Vegas animal shelter run by The Animal Foundation. Together, they have raised consciousness worldwide about the needs of animal shelters and their residents. Like Arbor, other dogs have discovered their hidden talent for creating art and used it to help others. A canine painter named Dagger is a Labrador mix that uses paint on canvas as his medium. Inspired by his artistic owner Yvonne, he produces paintings sold in New York and elsewhere to benefit Canine Companions for Independence.