It’s hard out here for a chimp, especially in the Congo, where poachers steal babies to sell as pets and shoot the adults for meat. Poor little Sagesse was taken from his mother at a young age — and then things got worse, as the chimp developed a tetanus infection, which caused violent seizures. However, Sagesse’s story started to turn around once rescuers found him. Now, he’s alive at a rescue and even has a female in his life. Sagesse was in such bad shape that rescuers worried he had died. Conservationists at the Great Apes Survival Partnership and the United Nations had to negotiate the terms of his release while wondering if the chimp was still alive. 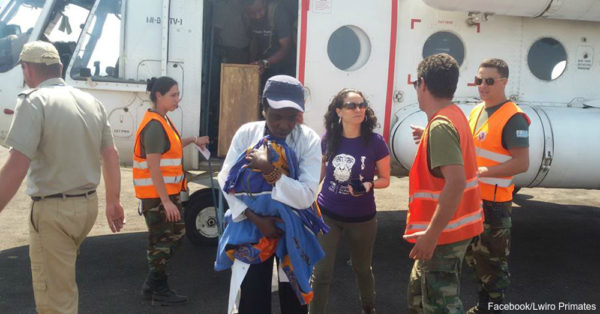 Luckily, when they picked him up, they found that he was. The Great Apes Survival Partnership reports that they immediately had him airlifted in a UN helicopter. Dr. Kuzito Kalule, a veterinarian, actually performed medical treatments on the chimp while the helicopter was in the air. Sagesse’s next stop was Lwiro Primate Rehabilitation Center, and when he got there, he was already feeling much better. 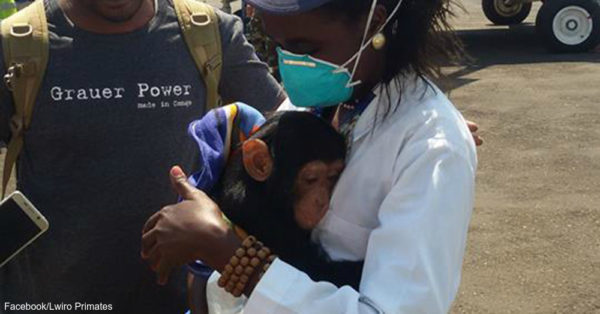 The staff at Lwiro immediately put Sagesse in quarantine so he could fully heal before meeting the sanctuary’s other 66 chimps. He didn’t need to stay in quarantine for long, and then things really got fun for Sagesse. According to The Dodo, after his quarantine, he got to meet Wenga, a female chimp who, like Sagesse, is an orphan. The two quickly got to know each other, climbing toward each other and embracing right away. Wenga groomed Sagesse, which is one way chimps show affection. Since then, the two have been together at all times.

The staff expects Sagesse to make a full recovery from his ordeal. Considering he has Wenga by his side, that shouldn’t be too difficult. The bond Sagesse and Wenga have is beautiful and heartwarming, and it’s great to see how happy they are. For more touching chimp moments, watch this rescued chimp’s reaction when he sees the sky for the first time.