In Harrisburg, Pennsylvania, an orange tabby receives a daily visit from her best friend, a wild deer. As One Green Planet reports, the feline and her unlikely playmate have developed deep bonds of friendship and affection over the course of their visits. Each morning, the pair spends time frolicking together in the yard, punctuated by a grooming session and snuggling. The cat’s owner has documented the animals’ remarkable relationship through photographs. 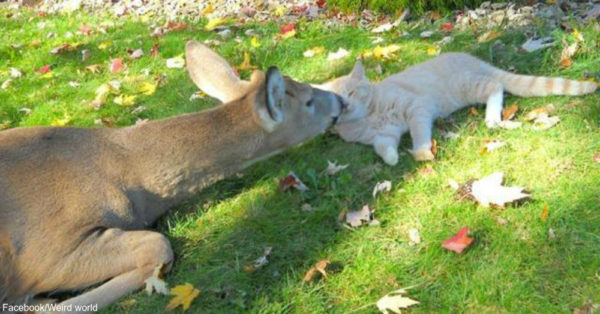 According to The Atlantic, interspecies friendships are rare, occurring primarily in situations of animal captivity. Scientists speculate that animals born and raised in captivity tend to overcome their natural fear of one another, especially when they are exposed to other species from an early age. Loneliness and boredom may also be factors that lower natural barriers between species in captivity. In some situations, animal friendships have even sprung up between predators and their traditional prey. 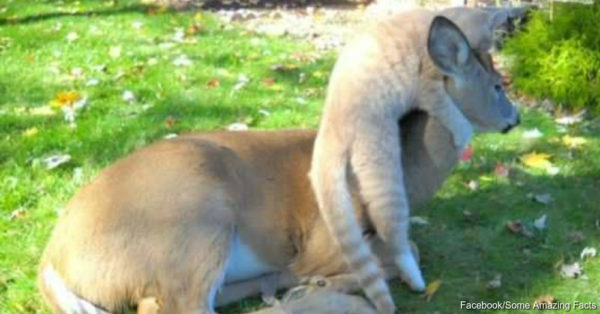 The devoted friendship between the domesticated Pennsylvania cat and her wild deer friend defies easy explanation, but their relationship is certainly adorable to observe. When the deer shows up at his house each morning, the cat carefully grooms his friend, receiving appreciative licks in return. As Love Meow demonstrates through photographs, the deer patiently puts up with the cat’s playful antics, even when the kitty perches on top of his big friend’s head. When playtime is over, the tabby and the deer part ways. The deer returns to the wild, while the cat patiently awaits a new day of adventures with her pal. Whether human or animal, everyone needs a special friend who makes us feel accepted and appreciated just as we are. Many people consider the bonds they form with their pets to be just as enriching and fulfilling as those they share with their human companions. If you are in search of a loving and nonjudgmental friend, considering adopting a lifetime companion from your local shelter.