A baby bird who tumbled from its nest was rescued by a most unlikely hero. The dog, a 2-year-old boxer named Rusty, discovered the bird in the backyard and alerted his owner, who took in the lost birdie. Jurgita Peciulaityte was in her woodworking shop on the Isle of Sheppey in England when she heard Rusty bark excitedly. She thought he might have found a cat, but when she went to investigate, she saw a bird, who promptly opened its mouth for food. “So I found some earthworms, which it gobbled down,” she told local news website Kent Online. 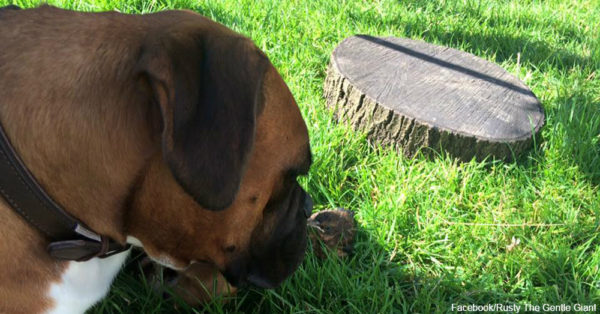 Covered in dark, downy feathers, the bird was still too young to fly or survive on its own, so Peciulaityte took it back home, where the bird slept in a basket hanging from a houseplant. She named it Birdie.

From the beginning, Birdie took a liking to the dog. It nestled in the crook of Rusty’s front legs and hopped along his back. When Peciulaityte picked the bird up, it flew back to Rusty. 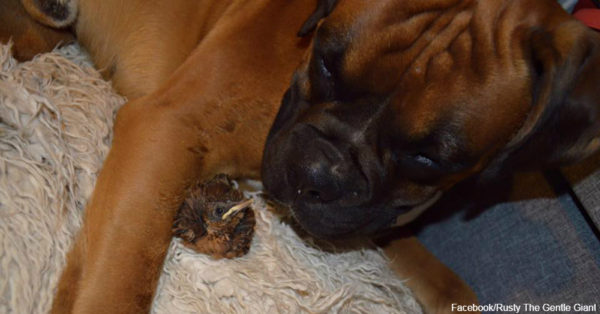 Peciulaityte continued to dig up earth worms for the bird, supplementing with meal worms and boiled eggs. In addition to regular feedings, she started a Facebook page loaded with photos. The page chronicles the odd couple’s friendship, including video of Birdie riding on Rusty’s back and the pair falling asleep together in an armchair. The duo quickly developed a large following of readers. Media coverage followed, identifying Birdie as either a thrush or a blackbird. 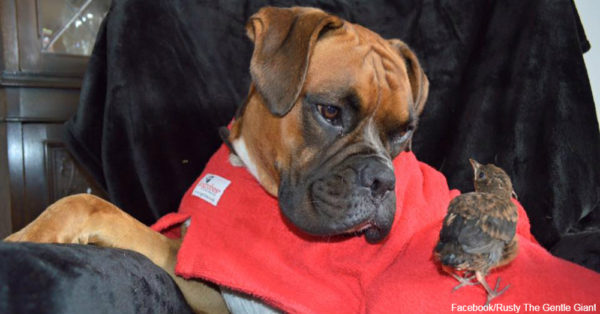 Within a week, the bird began to spread its wings. Soon, Peciulaityte was posting photos of Birdie in the yard perched on a chair, then in a tree, with Rusty looking on protectively. “Rusty is very gentle, ” she told The Dodo in an interview. “He will be one sad puppy when the birdie flies the nest.” Peciulaityte told reporters that she has no plans to keep Birdie as a permanent pet, expressing a wish for the bird to live a full life in the wild. “But if he decides to stay, we’ll be happy with that too,” she added.

Rusty and Birdie aren’t the only fur-and-feather duo caught on camera. Meet another dog who claims a bird as his BFF.