When Duffy, an 8-year-old Irish terrier rescue, got diabetes, the poor dog quickly went from being able to see clearly to total blindness. His owners were devastated to see their companion suffering. However, veterinarians were able to get the condition under control, allowing them to try surgery to restore the dog’s sight. The first moments after he gets his bandages off are something Duffy and his owners aren’t going to forget.Dog Time reports that one of the first signs of Duffy’s diabetes was when he started urinating in the house. Blood sugar tests confirmed it, and blindness struck quickly. Healthy Pets states that 75 percent of diabetic dogs go blind from cataracts, a condition that progresses rapidly and typically causes blindness within a year of diagnosis. This was true in Duffy’s case, as within about three to five months, he was completely blind. 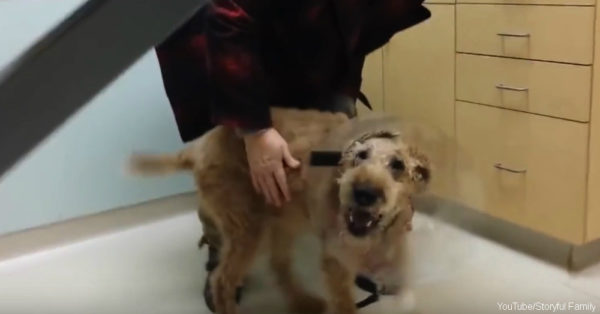 Duffy’s family weren’t going to give up on the lovable terrier. The vets put him on medication to manage his condition and kept track of his blood sugar levels. Once the numbers were steady, Duffy could undergo surgery. According to Daily Mail, the surgery cost $5,000, but for Duffy’s owners, the cost wasn’t even a factor. They just wanted their dog to live a happy life. Judging by the dog’s reaction, it was mission accomplished after the surgery. 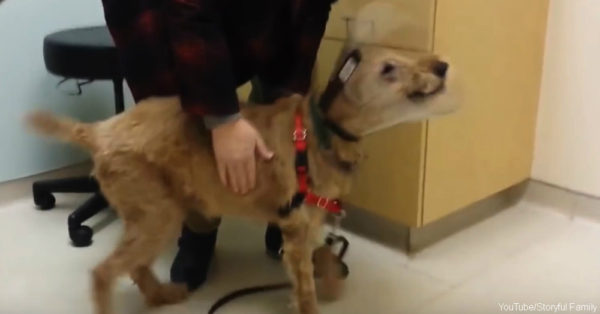 Duffy was thrilled to be able to see his owners again, and his tail was constantly wagging. To really appreciate this story, you have to see

the video that Duffy’s owners put on YouTube. It quickly went viral, and has racked up well over 11 million views in just over a month. It looks like everyone is happy that Duffy can see again. It’s so amazing that Duffy’s sight could be restored. Blindness can’t always be fixed with surgery, but there are other ways for blind dogs to survive and thrive. Learn about an innovative device that helps blind dogs get around.