This dog’s unique look has made him the darling of Portland, Oregon. Rowdy, a 13-year-old black Labrador, has a non-serious skin condition called vitiligo that causes a gradual loss of skin pigment. Due to his condition, the lab has striking white spots on his shiny black coat. While it might be the first thing people notice about him, Rowdy’s coat certainly isn’t the most interesting thing about him. Rowdy the Labrador has lived with owners Tim and Niki Umbenhower all his life, growing up alongside the couple’s two children. This special dog has had a life full of adventure — complete with a few close calls. 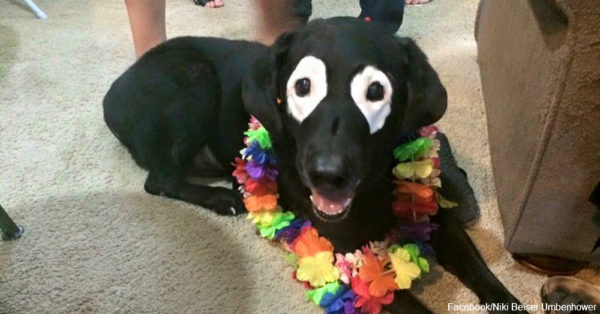 At one point, Rowdy drank contaminated river water and nearly died. Luckily, he was rescued in time to have his stomach pumped to remove the toxins. The dog cheated death a second time when he was shot by police who mistakenly thought he was part of a burglary.

Nowadays, Rowdy’s life seems a bit more peaceful. At some point in 2014, his owners noticed that the jet-black lab was developing white patches around his eyes. A checkup revealed the Rowdy had vitiligo, a skin condition that causes him to progressively lose patches of pigment from his coat. 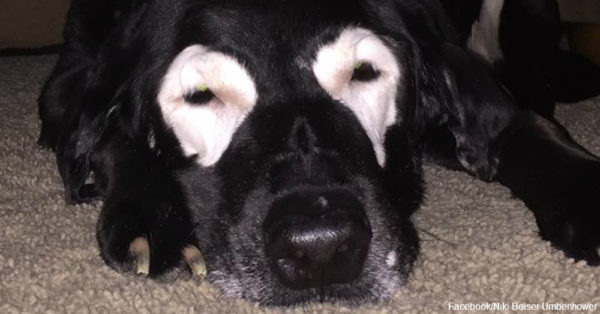 Thankfully, vitiligo is not life-threatening and doesn’t cause Rowdy any pain or discomfort. In fact, it’s made him a local celebrity, prompting people on the street to ask about his fascinating coloration. Rowdy was even featured on his local news station, much to the delight of his owners. Rowdy’s white patches give him the appearance of a superhero or perhaps the lost member of the band KISS. While some people might see vitiligo as a problem to be overcome, for Rowdy the dog it’s the start of yet another adventure. He’s not the only inspiring dog out there — meet Tatum, a puppy who’s overcoming her vision impairment to take on the world.