After 6 Days On The Streets, This Pup Perks Up When He Hears A Familiar Sound

An elderly dog that had gone missing after a loud fireworks display was found after six days of living on the street.

The animal was well trained, the Mirror reports, and often didn’t even use a leash to walk. But the loud display of fireworks was threatening enough to send the dog running across town.

The terrier’s owners were likely heartbroken, feeling they had let their canine companion down. But, six days later, the dog showed up on the doorstep of a family friend. 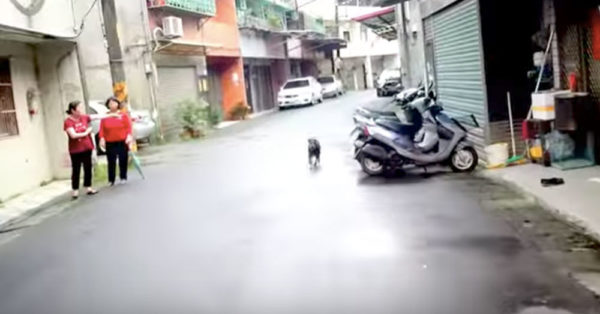 Hearing the familiar sound of his owner’s motorcycle, the dog is visibly excited as he runs to greet him!

Loud fireworks can feel threatening to dogs, causing them to run off or suffer disorientation.

Nobody wants to lose their family pet while out and about, and not all pets who run away get as lucky as this one did. So please leave your pup at home when attending fireworks displays or other excessively loud events.

Click the link below to read about a dog who wound up lost in the New Hampshire woods, only to be found by a local logger.