A Good Samaritan was walking along the road in Schenectady, New York, when they came upon a large plastic container. The container was completely sealed, but was full of something. As the person approached the container, they were heartbroken when they realized what was inside.

14 cats and kittens were abandoned by a heartless person and crammed into an airtight plastic container. They were left to die from suffocation on the side of the road. An additional three cats were found in cat carriers next to the plastic container. 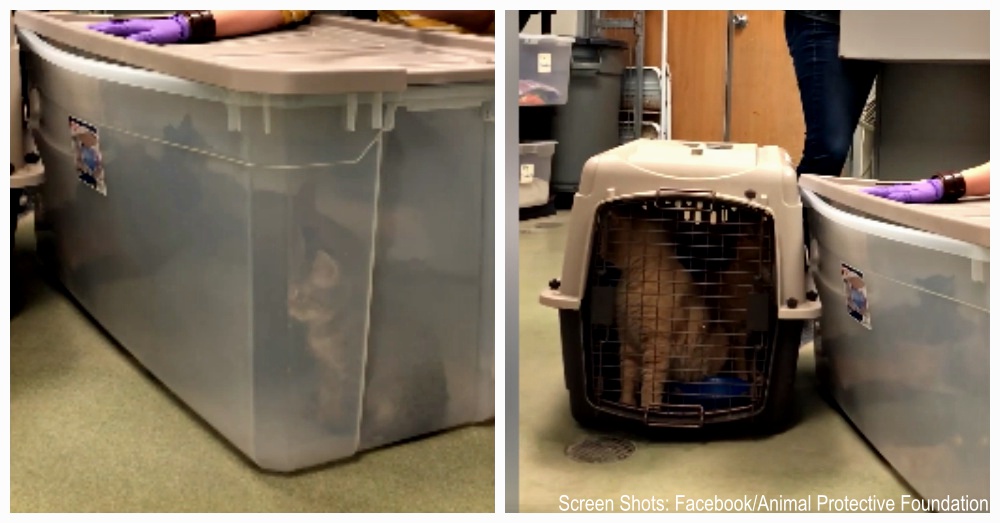 All of the cats and kittens were brought to Animal Protective Foundation in Glenville, New York. Amy Duskiewicz, shelter director, told Spectrum News, “People have brought in animals in unique carriers and bins, and usually there are air holes provided at least. But this one was sealed tight completely.”

The shelter took in the cats, even though they were already at capacity, and immediately had them treated by a vet. “They all had fleas and ear mites, they were all covered in urine and feces,” Duskiewicz said. “But generally speaking, pretty decent body condition.”


Many of the rescued cats were scared and cowered in the back of their cages. The shelter found temporary foster homes for several, until a loving family comes to adopt them.

After receiving the necessary treatment and unlimited cuddling from volunteers, some of the cats and kittens were put up for adoption. The remaining cats and kittens will be come available in the upcoming week.


The staff reached out to their followers asking for help with liter, food and donations to cover the medical costs for the abandoned cats. Their request was answered by generous people around the country. The shelter took to Facebook to thank people for their generous donations and kind words.

They are working with the SPCA on an investigation into the person responsible for abandoning the kittens. For now, they are focused on finding loving forever homes for each of the adorable fur balls. With names like, Hibachi and those adorable faces, how can people not adopt them?!