There are many who oppose England leaving the European Union, and included in that slice of scone are some of the Queen’s furrier subjects who hope to remain.

Cats in opposition to Brexit have been showing their solidarity with the EU through social media, championing the hashtag #catsagainstbrexit. Many have taken to Twitter, as felines do, some mildly annoyed, some with claw to caps lock, but all with good reason. These cats may fear a departure from their standard of living more than from the EU, but they’ve made their points and are hoping their humans take the advice. 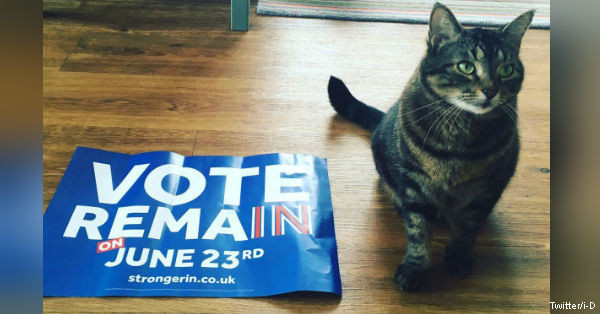 At the root of the problem for many felines is the dichotomy of this new term, “Brexit.” As a portmanteau of the words “British” and “exit,” it’s disappointingly obtuse, even for a country that describes half its food as “pudding.” What isn’t lost in translation on some of Her Majesty’s more hard scrabble Tabbies is frowned upon by the aristocratic British Shorthairs. One Maine Coon even questioned, if humans are allowed to truncate perfectly good phrasing in an effort to create a clever catchphrase for an issue with global consequences, who will truly be the lazier species?

One need look no further than England’s purrr-m minister of ill-temper, @realgrumpycat, to get a feel for the mood on the other side of the pond.

As England closes in on the referendum vote, the debate online has grown to a boiling point. While it’s hard to deny British cats’ stubbornness, it’s also hard to deny their familiarity with the Internet and blogging proficiency.

Because workers rights are protected by remaining inside the #eu pic.twitter.com/o42kWK9Jmq

Predictions of the effect Brexit will have on the imports and exports of England are cloudy at best, but the uncertainty has whipped some cats up into a stir. Like their ancestors did generations before, hoarding tinned kippers and finding solace from the air sirens as Nazi bombs rained down, today’s British cats aren’t going to let misguided humans take away what really matters.

Daphne is worried about trade restrictions on catnip #CatsAgainstBrexit pic.twitter.com/RSJO4O27tj

Some humans believe the Brexit has racial motivation behind it, and is nothing more than ultranationalist immigration reform veiled as an economic hedge. Others have said the final outcome will have little effect at all on the UK. There are even those who have linked the entire situation to the Bilderberg conspiracy and an enclave of Abyssinians. No matter how you do the math, the June 23 vote will have an effect on many.

It’s no fun being on the outside looking in. #catsagainstbrexit pic.twitter.com/XP3M9MyMIM

All eyes are on the UK as its people decide whether or not to unfriend Europe. Elsewhere on the island, some people are still acting with sanity. Read more about incredible rescue stories.