A backyard breeder in Washington has gone to jail twice in 12 hours for first assaulting a police officer and then, shortly after her release, a worker at the Thurston County Joint Animal Services (TCJAS) facility. Along with possession of a controlled substance, Gilles was charged with forceful assault and is no longer allowed to visit TCJAS or speak to its staff members.

Cathy Gilles breeds Borzoi dogs and had six on her property. But she stole two more Borzois to breed, prompting the police follow-up. After Gilles attacked the officer who confiscated the dogs and took them to TCJAS, she was put in jail for the night. But it’s evident her temper had not cooled.

Security footage from TCJAS shows Gilles pacing outside the building before it opened for the day. When she was allowed in, she immediately demanded the two Borzois be returned to her. Cameras from inside TCJAS, albeit without an audio feed, show Gilles confronting the officers, who later reported her “getting agitated,” according to KIRO 7.

“She reached in her pocket to pull her ID out, and a small bag of white powder fell on the floor,” animal control officer Ray Spragg said. 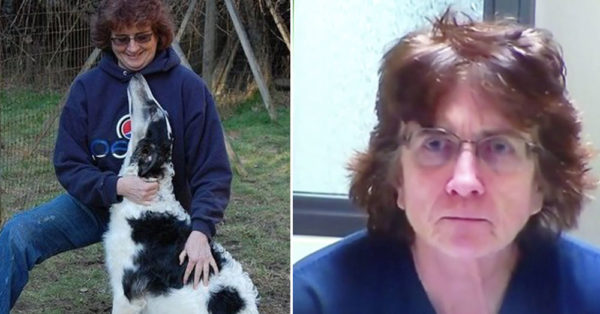 She quickly retrieved the bag and headed for the door, but not before shoving a TCJAS staff member into the front hallway and landing a few punches.

“She reached back and punched me as I was being pushed out the door,” the staffer said.

Outside, officer Spragg subdued Gilles until Olympia police could take her into custody.

Gilles has since been released from jail, but she has been ordered not to go near TCJAS or anyone who works there. It’s not the first time such a restriction has been placed on someone in Thurston County either. The Seattle DogSpot reports that police also banned Sharon Gold, founder of Turnwater-based Furever Homes dog rescue, after she threatened one of the animal control officers there.