Most people treat animals with the love and kindness they deserve. But one cruel man decided to use an innocent cat for target practice.

Luckily, this brave cat — whom rescuers are calling Callum — managed to escape his assailant, disappearing into the woods until police found him 3 days later with an arrow protruding through his body. Officers rushed the wounded animal to Maddox and Friends Cat Rescue, a non-profit organization in Conneaut, Ohio, to see if anything could be done to save him. 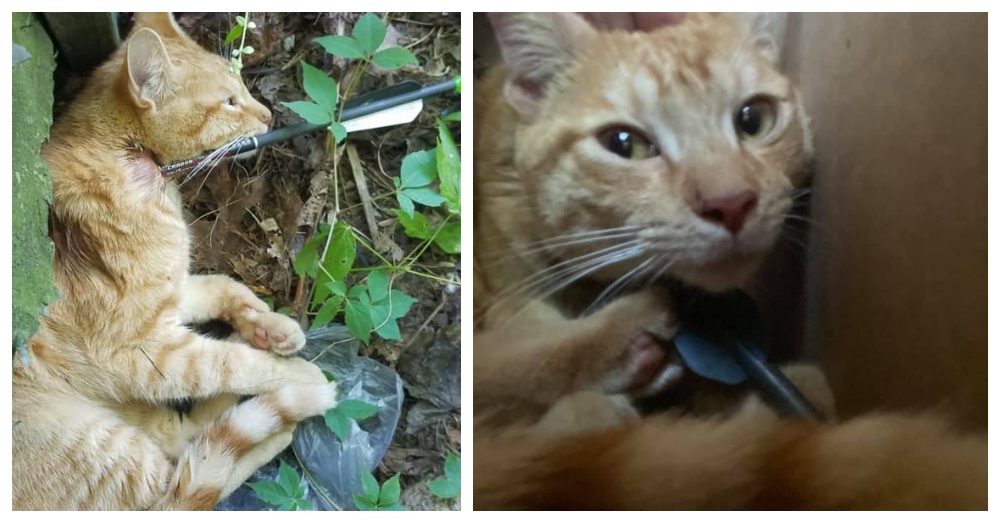 “The arrow entered at the throat area and exited near the shoulder,” the rescue’s founder, Sara Maddox, told the Star Beacon. Rescuers had to clip the long arrow with bolt cutters in order to rush the critically-wounded animal to the vet.

“I am taking this cat to the emergency room and this is going to deplete funding but I know this is what’s right,” Maddox wrote on Facebook. “I know this boy wants to live. I know this is a case where we need the WHOLE community to come together and support not only this cat but save this boy and MAKE A STAND FOR THE VOICELESS.” 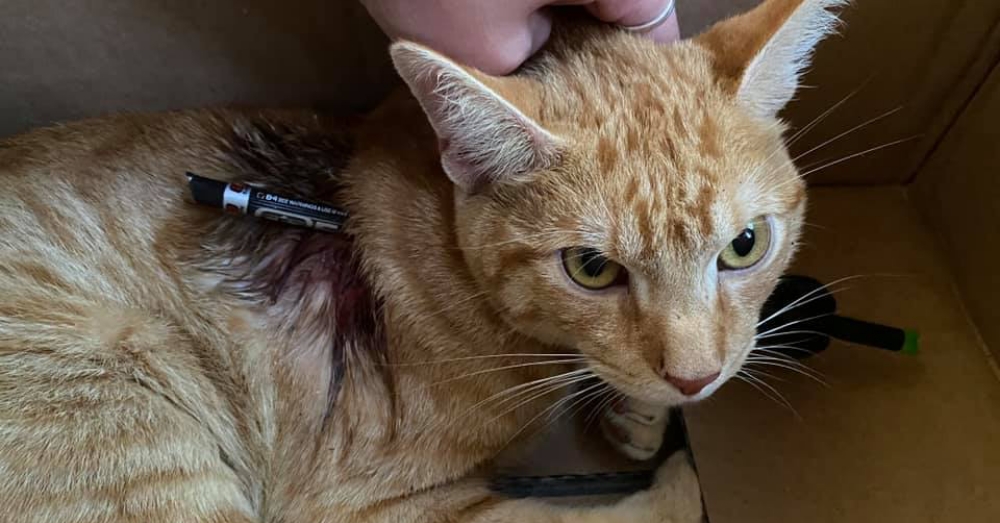 But Callum’s care would cost more than anyone expected. Because the arrow had veered dangerously close to his carotid artery, the cat would need to be transferred to an animal hospital and undergo $5,000 in surgery. This seemed like an impossible sum for Maddox’s rescue, which relies entirely on donations and already had dozens of cats in its care. But she also couldn’t give up on Callum, who was alert, responsive, and even purring. The cat seemed to be telling rescuers how much he wanted to live.

“We are going to go ahead with this surgery,” Maddox decided. “We have faith that things will work out as they should financially and on every other level. This boy was brought to us for a reason and he will live if we have anything to do with it. He will live in spite of the evil person that did this to him.” 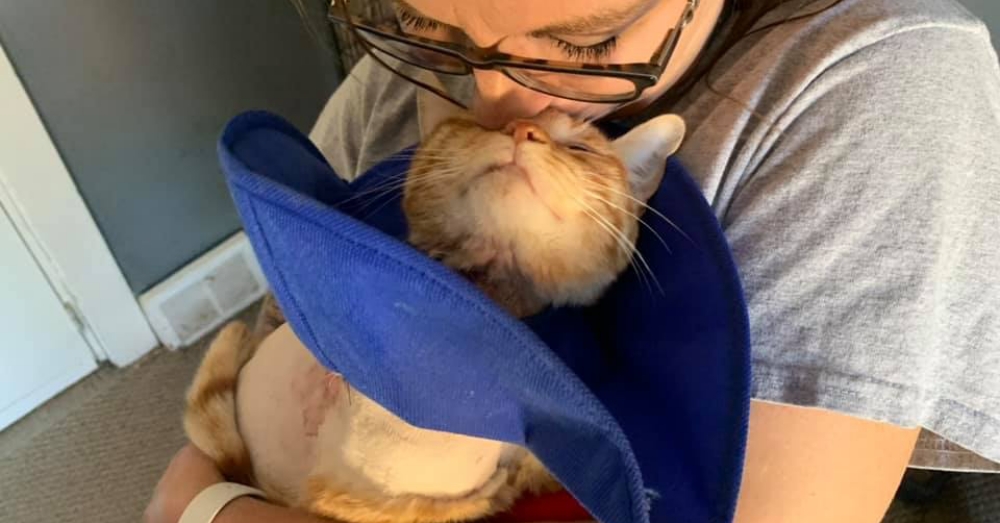 Thankfully, Maddox’s gamble paid off. Not only was the arrow safely removed, the
community has already helped raise $8,000 for Callum’s mounting medical bills. “He’s doing great this morning and expected to make a full recovery,” Maddox told The Star Beacon. “Callum is one of the most friendly and loving cats we have had to date.”

While Callum recovers, Maddox has turned her attention towards the 57-year-old man who has been arrested for this gruesome crime. “Callum will have no justice if [Robert] Nadolny is allowed to plea to only a misdemeanor charge,” Maddox told The Star Beacon. “We will ask with our actions that the judge not stand for a lax punishment for such an evil crime.” 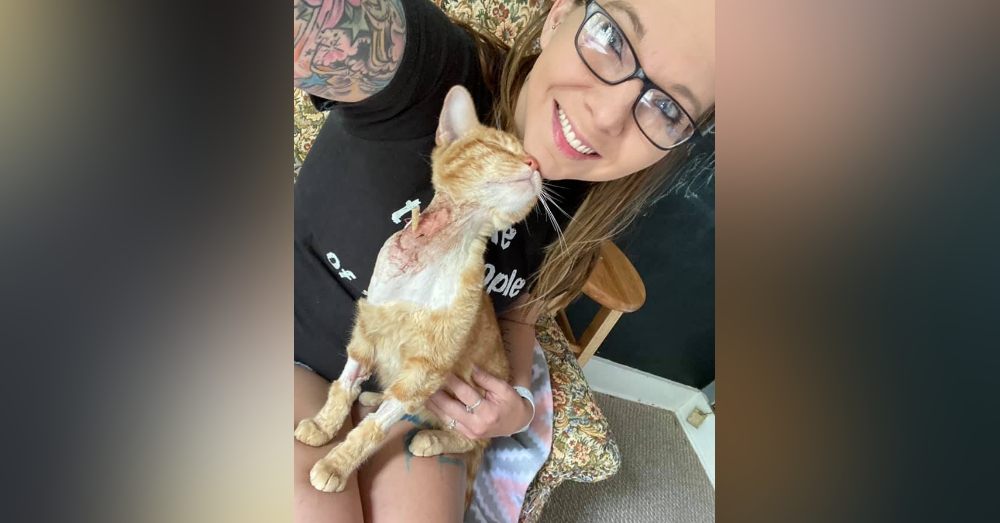 The possibility that Nadolny could possibly get away with just misdemeanor charges has also inspired rescuers to organize a peaceful rally outside the courthouse during his first hearing on August 4, 2020. “We ask that everyone wear a white tee shirt that has #justiceforcallum or #wearehisvoice written on it,” said Maddox, who hopes a large show of support will encourage the judge to hand down a sentence that sends a strong message about animal abuse. 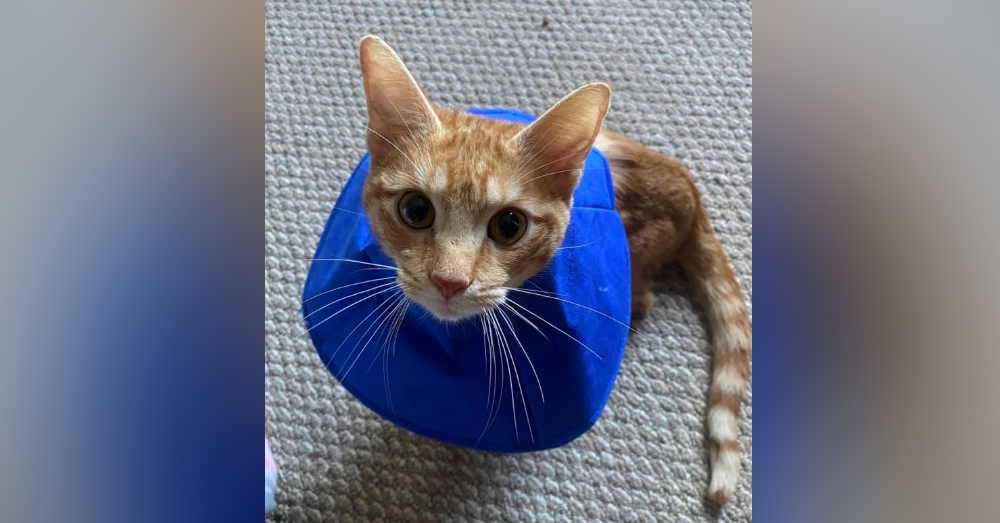 “This case means so much more than just justice for Callum,” Maddox wrote on her Facebook page. “This case could set the bar for future cases in Ohio and beyond. This is something I am asking that you ALL attend if possible. It is a BIG DEAL that we follow this case all the way through.

Find out more about Callum’s story (or make a donation to support his recovery) by following Maddox and Friends Cat Rescue on Facebook.