Every new year brings along another set of lofty resolutions as humankind vows to better itself. If your goals align with this pair of furry friends, you’re already off to a good start.

A woman in Turkey captured this quick video of a dog going well out of his way to save another animal in need. Despite what you may assume to be true of cats and dogs, in this case, they are lucky to have each other.

When the cat became stuck in a small pond, the caring canine came right to the rescue, saving the poor cat from drowning. Source: Twitter/@thefigensezgin
The dog finds a stranded cat, struggling in a pond.

The dog manages to get himself stuck for a bit, too, but it isn’t too long before both he and his new feline friend are on dry land. Source: Twitter/@thefigensezgin
The dog jumps in to help.

This rescue was a success, and many others are glad they had the chance to see it. The original post has been retweeted more than 2,200 times, and the video played more than 770,000.

“My hero, what a wonderful dog. Let’s learn from him,” wrote Laura E Source: Twitter/@thefigensezgin
In the process of rescuing the cat, the dog becomes stuck for a moment.

when the doggie finally made it out. pic.twitter.com/jRaHIGXyQQ

Beagles Thrown From SUV On Highway Reunited In Emotional Video: Click “Next” below! 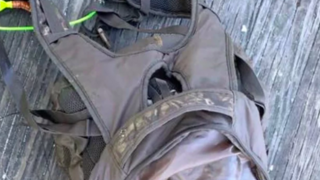