A couple in Long Beach, California never expected to come face to face with a burglar in their home. The burglar stole one of the only things that mattered – their beloved dog, Archie.

Kenny Gonzales and Miranda Perez are devastated after a man entered their home at 10am on Sunday and stole their 1-year-old French Bulldog. The burglar also stole some construction tools before escaping. Gonzales came face to face with the burglar after exiting his bathroom and seeing the man in his living room.


He dashed to his room to grab a weapon. When he returned the burglar had escaped. The couple immediately contacted the police. Luckily, a neighbor’s security camera captured the vehicle and the burglar.

The couple made a plea to the burglar to safely return their dog. Bruno, Archie’s 9-year-old brother, is lost without him. Gonzalez tells ABC 7, “take him to the dog pound. Just turn him in.” The couple is heartbroken and begs for his return. They do not care about the stolen tools. Miranda Perez pleas, “Give me my son back and how dare you.” 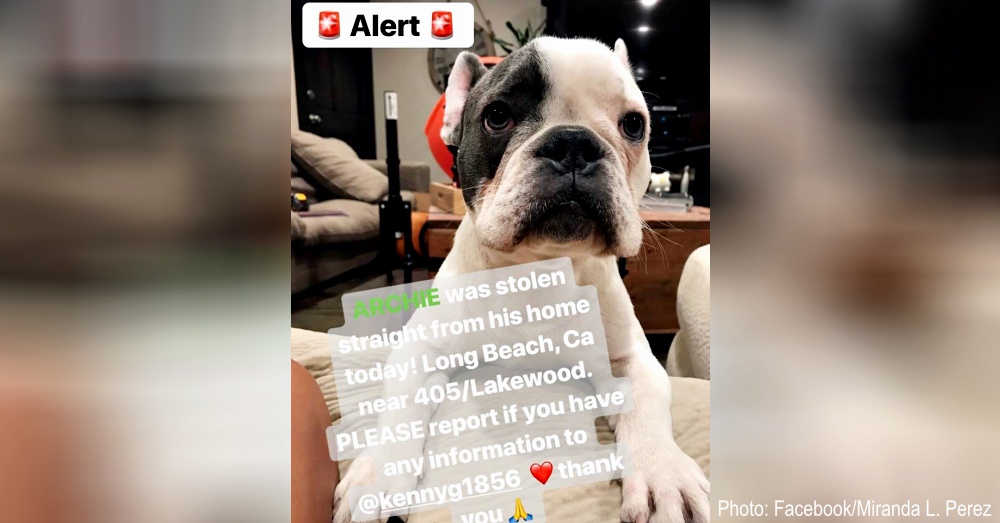 The burglar entered the home through an unlocked slider door in the back of the home. The home is currently under a complete renovation. Couple believes the burglar thought no one was living there.

The police have not caught the burglar and are asking for the public’s help. If anyone recognizes the car or people involved, please contact the Long Beach Police Department.