Buggy was one of the worst neglect cases in West Yorkshire. He was found when he was only a few months old, skinny and covered in maggots that were eating his skin.

A neighbor called World Horse Welfare when she noticed the poor condition the pony was in. Buggy was so weak it was hard for him to stand. The vet did not know if he would make it.

With around-the-clock care and love at World Horse Welfare’s Penny Farm Rescue and Rehoming Centre, Buggy pulled through and started the long road to recovery. Slowly his skin started to heal and his personality started to shine.

Fast forward to Summer 2017 at Equifest, a British national event, where he was named PRP/RSPCA Rescue Pony Champion. He was a champion in so many ways already, so the title was fitting.

“We are all absolutely over the moon with Buggy’s championship,” stated farm manager Fran Williamson. “Buggy’s story is a shining example of how a pony who has had such a terrible start in life can leave his past behind and go on to achieve amazing things. He’s such a sweet little character and is much-loved by everyone at World Horse Welfare, plus the many visitors who come to Penny Farm every week, so I think it’s safe to say there will be many people celebrating his success!”

But Buggy’s journey was not over yet. Now that he was transformed into the beautiful pony he was meant to be, he needed a forever home. Linda and Jim from Northumberland followed Buggy’s story from the beginning and jumped at the chance to add him to their herd. Two of their horses were adopted from World Horse Welfare, so they knew the process.


According to Horsetalk, after Buggy arrived at his new home, Linda stated, “He has settled in really well with our seven horses and three alpacas—although he does have a real penchant for exploring the farm whenever he gets the chance.” She went on to say, “We have had to alter his stable door, as he was too small to look over it, and I now love seeing his cute face peeping out each morning. He’s clearly learnt well from his time in the spotlight, as he’s such a poser whenever anyone has a camera around.”

This story has such a happy ending, and we wish Buggy a long and happy life. You can help wild mustang horses in need by signing this petition to protect them. 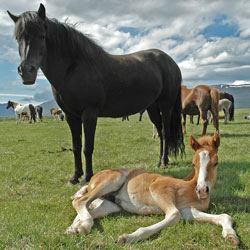 Nevada’s Bureau of Land Management plans to herd a large group of mustangs out of their peaceful habitat—a practice that is responsible for the senseless injuries and deaths of thousands of these wild and beautiful creatures.
You can help the horses remain in their natural environment. Tell the BLM to put an end to their roundups, allowing the horses to run free where they belong. Sign the petition!
Make a difference!