Border Collie Gets Highest Recognition For Saving Lives Around The World

No dog has ever been knighted in the history of the United Kingdom, but the PDSA Order of Merit bestowed upon Bryn the Border Collie is surely an honorable equivalent.

As a member of the International Search and Rescue Team, along with handler Steve Buckley, Bryn is responsible for saving the lives of people in disasters all around the world. In 2011, Bryn was in Japan, pulling survivors from collapsed buildings after the devastating Tōhoku earthquake.

Pictures of Bryn emerging from the wreckage, covered in blood, actually made international news. Thankful that his dog’s dedication to the job isn’t far outpaced by his ability to heal, Buckley had to call home and let everyone know Bryn would be patched up soon. 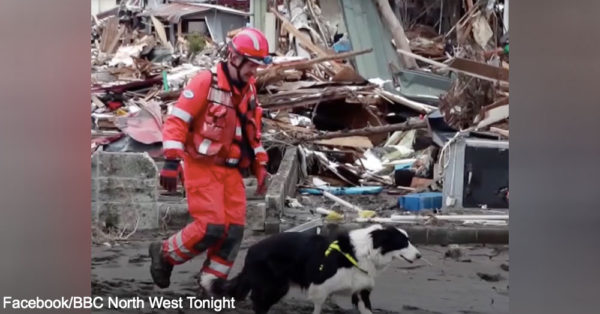 “Bryn’s leg was super-glued and bandaged and he was back out again helping the next day. But it did look bad at first. It wasn’t actually a bad cut but, because he was running around and his heart was pumping, there was a lot of blood on his leg,” Buckley told Cheshire Life. “It made a dramatic photograph for the front of The Daily Mail – so much so I had to borrow a satellite phone from a British TV crew so I could call Sylvia – I don’t normally have contact when I’m away but this was important. She would have been worried about him.”

Since Japan, Buckley and Bryn have traveled to several other countries, wherever their disaster rescue skills are needed. in 2015, that brought them to Nepal, following an earthquake that killed almost 9,000 and injured around 22,000. When they arrived, they found that even the hospital had been leveled in the disaster.

“A group of us helped us to get electricity back to that hospital building and that felt incredible,” Buckley said. “Bryn is trained to find live bodies and that’s what he focuses on first. But then he is involved in body retrieval too. This can bring great comfort to families who are then able to at least bury their loved ones. Bryn has never actually found a survivor because it doesn’t happen a lot in these kinds of situations. But when a team does find someone alive it is such an incredible moment.”

Buckley and Bryn have been working together since 2005, and when not assisting with rescue efforts in India, Sumatra, Japan, or Nepal, the pair spend even more hours together training for the next mission. But all of that is about to change for Bryn, now 11, who will be settling in to Cheshire countryside living as a member of the Avon Fire and Rescue Urban Search team. He’ll be kept company by Fenn and Pippa, Buckley’s other dogs, while Steve is out helping save lives. 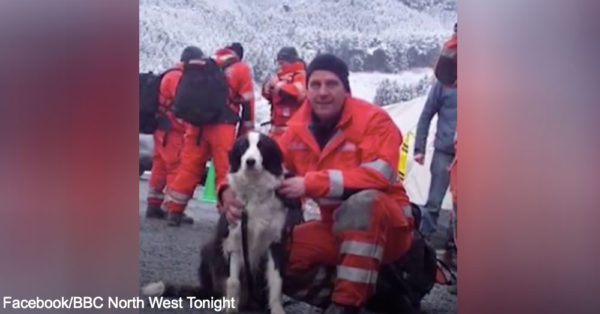 ‘Bryn and I have worked in some challenging environments like in the Japan tsunami in 2011 when there was the threat a nuclear power station nearby was unstable,” he said. “It can be stressful and intense. It is always difficult to acclimatise when I come home. Thinking all of that devastation is still going on. But it is good that we were able to help in some way. I just spend plenty of time with Bryn.”

The Animal Rescue Site wishes the best to Buckley and Bryn. If not for their selfless sense of duty, many more could have perished.

More often than not, lives can be changed when humans make it through crisis. To read more about a firefighter whose family is a little closer after a tragic call, click the button below.