As Brianne Smith readied for work on October 28, she had no idea the frenzy of attention she’d be attracting. But after saving a 2-year-old pit bull from a maniacal man who shot the dog and slammed its head in a car door, she certainly deserves it.

When Smith first caught sight of the dog, near 8 Mile and Schaeffer, in Detroit, it was already bleeding from the man’s attacks, which she could not abide.

“I was very, very, very highly emotional after seeing him kick the dog, and his head got slammed in the door of a car… I freaked out,” she told Fox 2.

Smith confronted the man and demanded he release the bludgeoned animal. But he wasn’t about to give up, and after Smith made it known the police would be called, the man grabbed the dog and fled.

Returning to work, Smith faced the uneasiness of wondering what would happen to the badly injured dog. The feeling was fleeting, though, as her coworkers would soon find the dog returning to the scene of the initial attack.

“A couple of hours later when I was told the dog was back and was severely bleeding, we found him running down this way,” Smith told Fox 2. “He ran right down those paths and about two houses, he went into a neighbor’s yard to lay in peace. I got some food and brought him all the way back to this gate. I wrapped him up in a couple blankets I had in my car and waited for the rescue to come get him.”

The horror Smith and her coworkers were purview to only represented a fraction of the pain the pit bull was put through. As surgeons worked to repair the dog’s snout the following week, a bullet was found lodged in the animal’s nose. 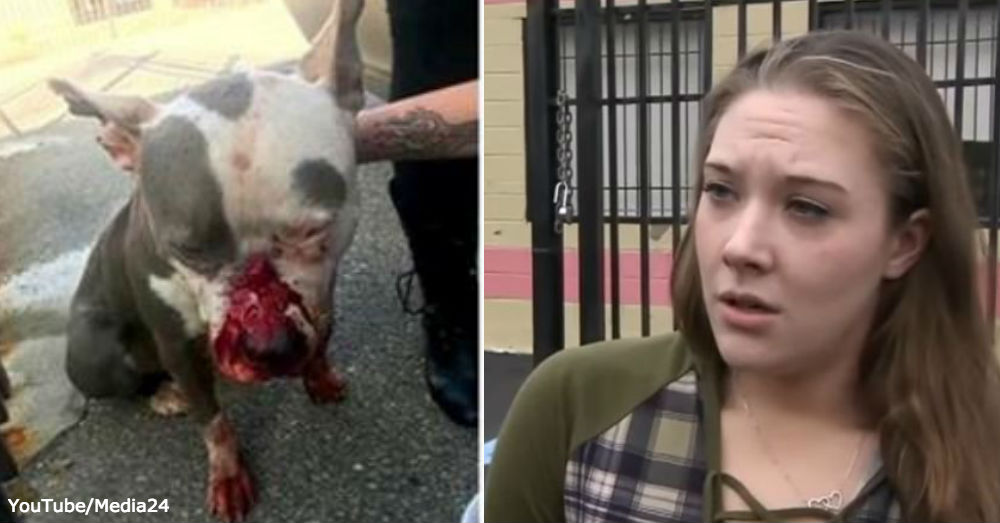 “They had to wire his jaw because it busted his jaw,” Michigan Anti-Cruelty Society’s Teresa Wright told Fox 2. “He’s going to be okay, he’s sweet as sweet could be.”

The slug will remain in the dog’s snout, as removing it could cause further damage.

“Diesel,” as he’s been named, is now in the hands of Detroit Dog Rescue. As for Smith, she has indicated she would be interested in adopting Diesel, and is looking forward to starting the process.

The Animal Rescue Site wishes the best for Diesel, and the countless other rescue dogs that are in need of forever homes. As such, it’s important to draw attention to the Special Pals Shelter in Houston, Tex., where financial obstacles are keeping the facility from meet its adoption goals. Certain features at Special Pets need to be improved for the increased mental health of the animals in their care. The dogs at the shelter spend most of their times in kennels, which means they don’t get much time to run and play, and spend much of their time stressed out. And the only space for cats is in the lobby of the shelter, where their cages line the walls.