Animal rescuers are true heroes. Two rescuers refused to give up when they received a call about a nervous stray pit bull. When they arrived they were shocked by a coyote lurking nearby.

Hope For Paws is an animal rescue that is based in California. Teresa, a woman who lives in the area, called the rescue to tell them about a stray dog. Jackie Artecona and Eldad Hagar ran a few miles after the dog when she became frightened. The dog finally stopped in a vacant baseball field. 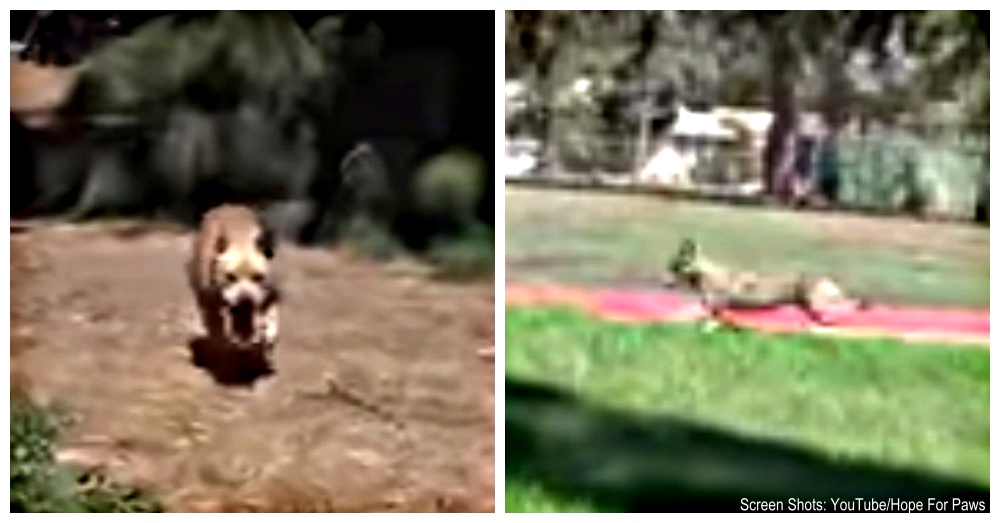 Thankfully, the coyote was nowhere in sight. They closed the gate and slowly approached the nervous girl. Jackie had a hamburger and offered some to the dog. However, it was over 100 degrees and the dog was exhausted. The rescuers worried that she might suffer from heat exhaustion, so they let her rest for a bit in the shade of a tree.


Finally, the dog turned and came toward Eldad. He used a gentle snare and was able to catch her. The hard part was to now get her back to the car. Slowly and with many breaks to rest, they made it back to the car. The kind woman who called about the dog brought a huge bowl filled with water.


They decided to name the sweet girl, Brandi. They loaded her into the air conditioned car and headed for the vet. Brandi was examined and in good health. A few days later she was settling in at a foster home.

The rescuers went to visit her and saw she was still a bit nervous. They happened to have another rescue dog, Miller, looking for a home with them. When they introduced the two, it was love at first sight. Brandi instantly started to play and transformed into a happy dog.

Brandi and Miller are both available for adoption. If you are interested in adopting them, you can contact Doggie Bonez.