Tia Vargas of Idaho was descending on her hike on Table Rock Trail in Boise’s Grand Tetons when something caught her eye. An English springer spaniel was limping and attempting to keep up with a group of hikers looking for its owner.

Immediately, Vargas approached the hikers to see what was wrong with the dog. The hikers had little kids and they were almost to the top of the mountain. “I suggested they continue on and I would carry the dog down for a ways and find help. It wasn’t till later on when we were half way down that I figured out we were now alone on the trail and that it would be up to me alone to get him down. I was hoping there would be help at some point,” Vargas posted on Facebook.


It was obvious the 55-pound dog was in no shape to make the six-mile hike down the mountain, so Vargas decided she would carry Boomer on her shoulders. “His eyes were super puffy and bloodshot. His body was swollen, even his bum was very, very swollen. And you could tell he was very dehydrated. He had cuts and scratches on his belly and on his head. He was in bad condition,” Vargas told ABC News. 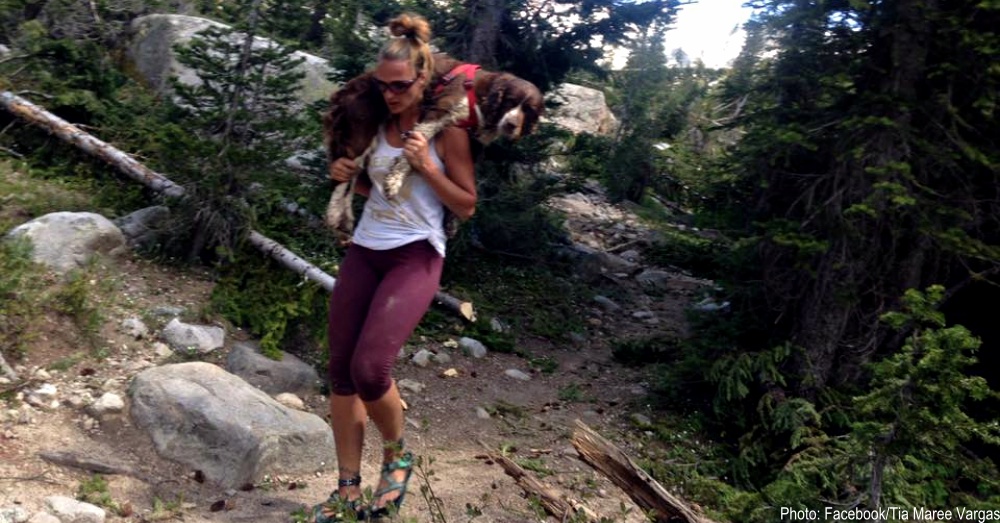 She knew that if she didn’t get the dog off the mountain he would die. Vargas was in route to meet her dad to finish the hike and would need his humor and support to save Boomer. The journey down was difficult with the added 55-pounds on her shoulder, but then it started to rain.


“We got lost twice. We couldn’t find the trail. And at one point we had river on both sides of us, and that’s about when my legs were done. We were walking through brush and thicket and it was scratching our legs. It started to rain and I put Boomer down on a rock and I laid on his belly and I was just done.”

Her dad told her a joke and with words of encouragement she regained some strength. “I said a little prayer and I picked up Boomer and it literally felt like someone had walked up behind me and lifted the weight off my shoulders.” Six hours later, they made it to the bottom of the mountain.

Boomer’s owners left a note stating they lost their dog yesterday, July 4, when they were hiking the mountain. It turns out Boomer “wandered off and fell 100 feet down a snowy crevice.” Boomer’s owners were so relieved the dog was found and safe. “They were so worried. And their kids were just in tears. They thought for sure that they had lost him forever.” They were so moved by Vargas’s efforts they asked her if she would like to adopt Boomer. The family was in the process of moving to Arizona and looking for a new home for the dog.


Vargas happily agreed and Boomer joined her family. Vargas told her previous owners they can visit the sweet dog anytime they want. Boomer “the miracle dog” now has his own Facebook page that keeps all his followers updated on his recovery. He is being treated for his injuries and on the road to recovery. Fate brought them together.