When you’re in a crisis, who better to turn to than the caped crusader?

Well, he may not be caped, but a little pink pig named Batman is always around to save the day when his feline friend, Sriracha, has a problem. The cat suffers from regular seizures, Goodfullness reports, but Batman is able to sense them coming on, and he quickly leaps to the rescue.

Young Sriracha has struggled with feline cerebellar hypoplasia all her life, but, shortly after bring rescued by New Jersey’s Rancho Relaxo, she found a fast friend in Batman the piglet. 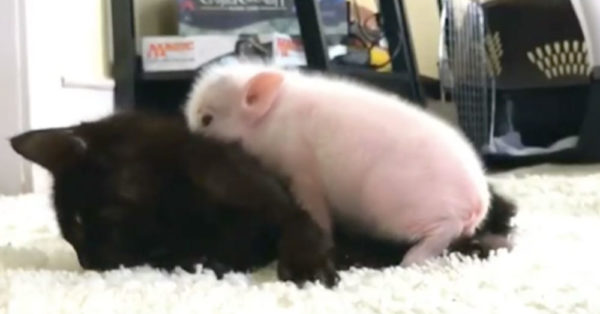 When Sriracha has had an episode of seizures, sometimes lasting for days, Batman is quick to come to her aid.

“Batman is our rescued orphan piglet. He is less than two weeks old now,” Rancho Relaxo posted to Facebook. “He has been extra attached to Sriracha today. I swear he knows she has had a bad couple of days and feels the need to comfort her.” 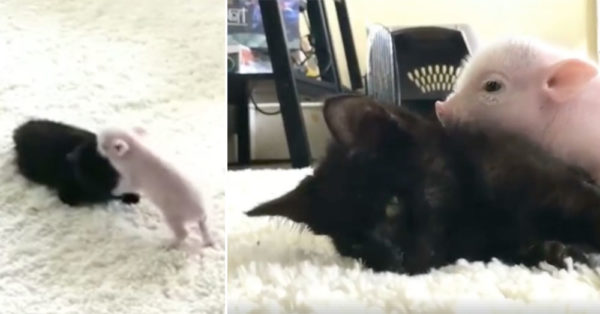 This beautiful friendship has captured the hearts of countless fans around the world on social media and, especially, at Rancho Relaxo.

“This is why I do what I do,” the Facebook post continued. “This is why my entire life is dedicated to the animals. They are the most beautiful things on this planet.”

After you get a chance to share the sweet story of Batman and Sriracha with your Facebook friends, click the link below to read about a pit bull who, along with being a shining example of the gentleness pit bulls are capable of, stood up against breed discrimination. We will all miss Fifty, but his memory will hopefully inspire many more to join the fight.