The life of a firefighter is filled with unexpected dangers. Even the most prepared individuals, supported by years of extensive training and full turnout gear, can find their lives changed in an instant during a crisis.

For Farmington Hills firefighter Nick Newcomb, life changed when he answered a call in late February. A woman had died in her home, and Newcomb responded with his fellow firefighters to retrieve her body.

There was no smoke, nor a wild blaze to battle, but the textbook operation took a detour when Newcomb discovered Banjo, a 4-year-old Boston Terrier with visible signs of dehydration.

The City of Farmington Hills first posted details of the story to Facebook on March 9.

“While fire fighters gave Banjo some water, a friend of the resident notified the victim’s sister of what had happened. Fire fighters soon learned that no surviving family members lived in Michigan, and they were not in a position to take Banjo.”

“Later that afternoon, Nick Newcomb called his fiancée Stephanie Pann, and she agreed to the idea of adopting Banjo. Nick called the victim’s sister to ask if he could give Banjo a new home and, without hesitation, she agreed. She told him how pleased she was that her sister’s beloved dog would be well taken care of by his new family.” 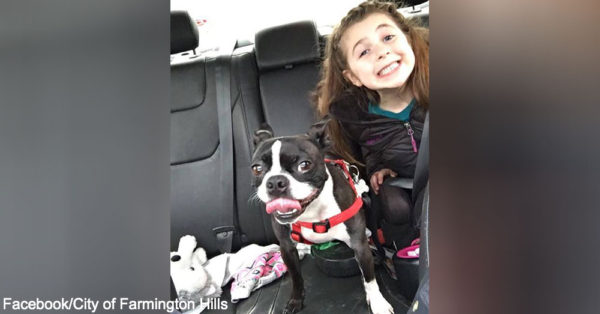 “‘Our department prides itself on compassionate service to the community but this story is particularly heartwarming,” wrote Farmington Hills Fire Chief Jon Unruh. “We extend our condolences to the family and hope that this wonderful gesture by Nick and his family will offer some small comfort during a very difficult time.'”

We wish the best to the Newcomb family and Banjo. For another thrilling tale, click the button below to read how an unwanted Husky puppy rescued a victim of abuse from the darkest time of her life.