Almost all rescues tell people who adopt, to return the animal to them if they are unable to care for it. With that said, no one expected a cat that was adopted to be returned with an eye about to fall out.

Bandit, was captured with his brothers on a farm where inbreeding ran rapid. All the cats were feral and Bandit’s mother always avoided rescuers. After multiple failed attempts to capture her, the liter of brothers was brought to Nanny’s Fur Kids Cat Rescue.

Bandit had an eye infection that was treated with drops. He continued to have issues with his eye and was put on eyedrops to control it. In January of 2017, he and his brothers were all adopted into their presumably forever homes. 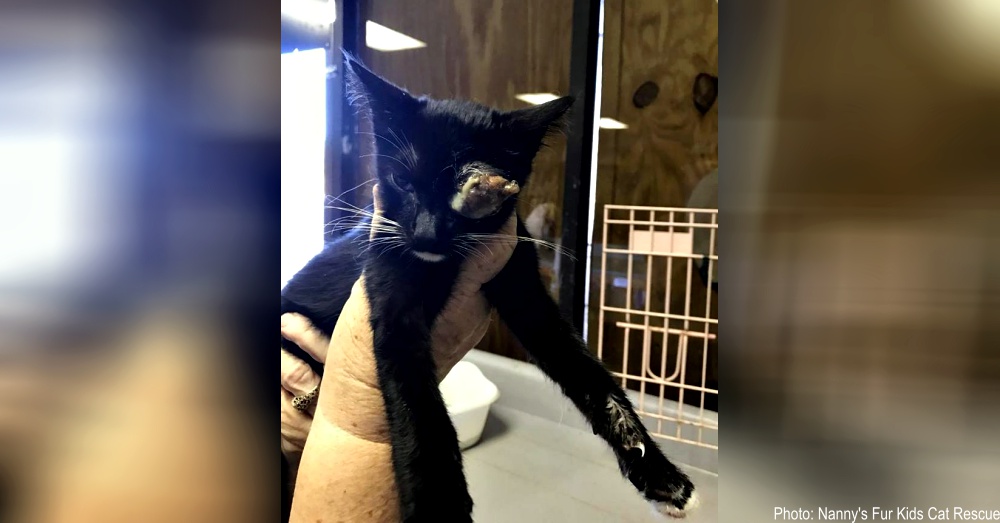 However, Bandit reappeared one day when the adopter returned him with one of his eyes infected and about to fall out. The staff rushed him to the vet to have it treated. The vet immediately started him on medicine for the infection and to reduce swelling. Unfortunately, it was too late and the eye needed to be removed.

After the surgery, Bandit was watched around the clock by the vet team to make sure no complications arose. A few days later, he returned to the shelter with a patch on. He recovered quickly and you would never know he was missing an eye by the way he acts.

Nanny’s Fur Kid thanks GreaterGood.org’s Rescue Bank program for providing food and supplies, which allowed them to use the money saved on Bandit’s eye surgery. “Without the help from GreaterGood.org’s Rescue Bank, we could not have afforded all these vet bills. The donated food and litter gave us more funding to care for many medical vet bills. Each one of our feral cats has their own story. Without the help of Rescue Bank, we wouldn’t be able to take in any more ferals that deserve to be loved.”

Bandit is being spoiled as he awaits his forever family. If you are interested in adopting this lovable cat you can contact Nanny’s Fur Kid.