Have You Heard of These 5 Ultimate Animal Dads?

Father’s Day is June 21st! While it’s typically a day to celebrate human fathers, we thought that the fathers of the animal kingdom could use some love too! Make sure to check out the last page for one of the coolest displays of dedicated fatherhood I’ve ever seen.

Here are five of the greatest animal fathers that exist! Which one is your favorite?

After the female penguin goes through the draining process of laying her eggs, she must return to the ocean to feed and recover, leaving the father penguin to keep the egg safe and warm during the winter months. He must stand completely still with the egg tucked safely between his feet during some of the most brutal weather months in Antarctica. If he moves or lets the egg get exposed to the bitter air, the offspring could perish. What an amazing responsibility, and an amazing dad!

Although different in appearance and habitat, frogs and toads actually share a lot of similarities when it comes to parenting. Some male frogs keep their tadpoles in their mouth until they are ready to explore the world on their own. One type of toad, accurately named the midwife toad, carries around his young on his legs, embedded in his skin, until they are ready to emerge. Talk about dedication!

This catfish isn’t hardheaded when it comes to his parenting duties. Quite the opposite, actually! He carries around the fertilized eggs in his mouth for up to 60 days until they hatch. It’s a method called mouthbrooding. He can’t eat during this period, but he keeps his young safe and that’s all that matters to him!

The red fox is a dad who is as tough as he is sweet. For the first few months of his offspring’s life, the red fox provides food and shelter for his pups and their mother, but that soon changes. In an effort to teach them how to survive on their own, the father fox stops bringing free food around in order to encourage his young pups to leave the nest and become independent. What a great life lesson. Sounds like a lot of human fathers I know!

Are you ready for one of the coolest things you will ever see? 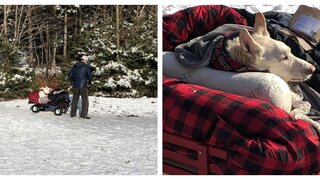 Man Configures Wagon With Dog Bed, Blankets, And Pillow So His Paralyzed Dog Can Still Go On Walks 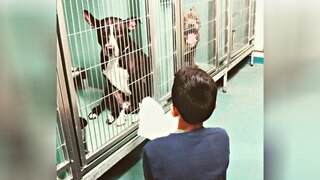