Everything is bigger in Texas, including the number of dogs dumped on the streets in rural Dallas.

A Dallas based dog rescue group, Dallas Street Dog Advocates (DSDA), was established after animal lovers in the area were tired of seeing dogs dumped and abandoned in fields. There is undeveloped land in southeastern Dallas that has been a common dumping ground for unwanted pets. 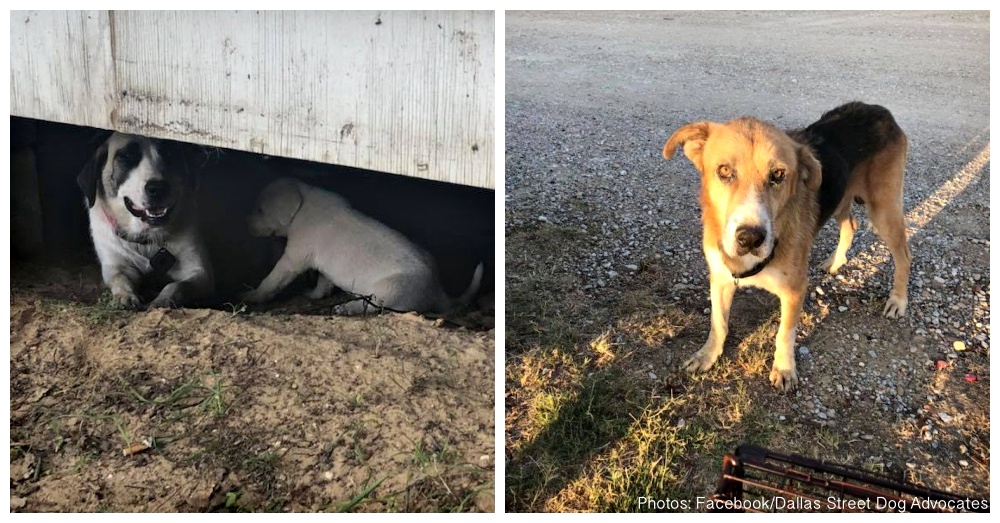 The shelters in the area are already at full capacity due to large amount of dogs abandoned. That is where rescue groups like DSDA steps in. The rescue group heard about a fluffy Great Pyrenees wandering around by the wetlands.

Volunteers Relle Austin and David Maldonado set out to try and find the fluffy dog, but instead found four strays in a parking lot reported Dallas News. They followed them to a field where they were shocked at what they found. “The Pack” as they are now known, consisted of 29 dogs found living under an abandoned trailer. There were adult dogs, puppies, males and females. The rescue team jumped into action and started by rescuing the females, to prevent any more breeding.

It took four months to trap and rescue the dogs because most were afraid of humans and ran. The rescuers would bring food along and earned the dogs’ trust slowly. Traps were set to try and capture some of the dogs using SPAM and sardines to lure them in. Others were friendly and jumped right into their vehicles. Once all the females and puppies were rescued, they focused on the males.

They were down to the last two males, which were proving to be difficult to catch. Volunteer Jessica Bolton and Maldonado made a last minute decision to visit the area and attempt to rescue the last two dogs. This time they decided to use tacos from a taqueria in Garland to entice them. They placed the taco inside a trap and waited.


When they returned 15 minutes later, Liam, one of the dogs, was in the trap. He simply could not resist the taco. Lester, the final male decided he could not leave his friend and joined him in the vehicle.

All the dogs were taken to a local vet and examined. “Including the puppies, there were a total of 29 dogs in the area. We were unable to save 2 of them but we were able to rescue 27 of the dogs from the pack. Complete vetting for each averages out to about $500 a dog. This was a huge endeavor for us! We definitely can’t and wouldn’t have been able to do it without fantastic supporters and great collaboration with our veterinarians,” posted DSDA.


They all needed to be treated for fleas, ticks, and many for heartworm. For most of their lives they had to fight for food and shelter. Now they will all be put up for adoption and hopefully find loving forever homes.

A few are still in need of a loving foster home to help them recover. “We are still in need of experienced Dallas area based fosters homes for some of the adults who just need a little time socially to decompress and nursed through any medical issues including heartworm treatment. We also are in need of Puppy fosters!!”